Home
Reviews
REVIEW: The Strange Thing About The Johnsons (2010) 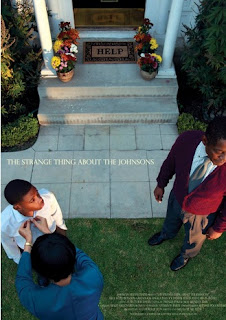 The Strange Thing About The Johnsons is fast becoming the independent cult shocker movie of the year. This film, written and directed by Ari Aster as his American Film Institute Thesis film, has been sizzling through the internet like a Kim Kardashian sex tape.

The film is an odd depiction of incestual sexual abuse with a twist. In this film, the son continually molests his father from his teen years until he reaches adulthood.

How could this happen? Who in the world came up with this scenario? What did the mother do about it?

These are all immediate questions that are answered in this 29 minute short film. In short, this is no ordinary remake of a popular Hollywood theme. This film brings to light an age old problem but frames it in such a way that we all feel the sting as though it is a fresh wound. In the father’s face you can feel the pain and the confusion of the sexual abuse victim. In the father’s fear you can understand the self loathing and blame for being a part of such an ordeal. The mother’s reaction to the situation is a tear jerker.

After many discussions about this movie I believe that the director has left his audience yearning for more. The acting, the cinematography, the editing, the storyline- all superbly crafted. You will end the movie immersed in emotional conflict and most likely head over to the movie’s facebook page to vent and read the reactions of others.

This is not an easy film to watch and it is definitely NSFW. Watch the full length movie, The Strange Thing About The Johnsons Here.

The Strange Thing About the Johnsons – don’t ask, just watch! from Michael Roy on Vimeo.