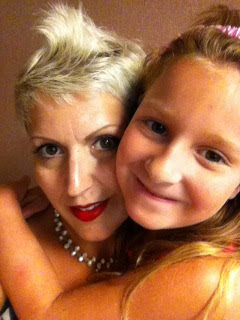 At one point or another, I’m sure you’ve heard the old phrase “it take a village” during times of hardship. While it may be thrown around a lot, I’ve recently come to realize that this phrase is very true.

On August 4, 2005, my daughter, Lily, was born after a pregnancy, which, with the exception of a C-section, was relatively uneventful. Throughout this process, however,
our “village” surrounded my husband and me. It included my parents, his family, and our many friends. While the aura of the delivery room that day was one of celebration, joy, and excitement, there was a dreadful storm on the horizon.

A month or so after I returned to work, I began to feel tired, breathless, and completely devoid of energy. While these symptoms are often attributed to being a new mom, I still felt as if something was wrong. Playing it safe, I decided to schedule an appointment with my doctor to see if everything was alright. After a myriad of tests and procedures, I found that my symptoms weren’t that of motherhood, but of something much worse.

On November 5, 2005, I was diagnosed with malignant pleural mesothelioma. Affecting the lining of the lung, pleural mesothelioma is usually caused by exposure to asbestos. After a little
research, I found out that I had been unknowingly exposed to it as a child. Since then, it had
remained dormant in my system, only to rear its ugly head 30 years later.

My prognosis was very grim. If I didn’t seek treatment, I would have only 15 months to live. The first thing that came to mind, however, was the thought of my husband and daughter being all alone. This thought made me realize that we had to do whatever it took to rid me of my cancer.

As a result, my husband and I decided to take the most drastic move, which was to seek
treatment from specialists in Boston. Leaving Lily behind in South Dakota with her grandparents, my husband and I flew to Boston so that I could undergo a form of treatment known as an extrapleural pneumenectomy. The procedure required the removal of my left lung, followed by 18 days of recovery in the hospital. This would be followed by an additional two months of recovery, along with chemotherapy and radiation treatments shortly thereafter.

Despite the hardships, I eventually walked away from my fight completely cancer-free. However, I couldn’t have done it without my village. Family and friends from all parts of our lives not only came to us in our time of need, but also helped my parents raise Lily. During our stay in Boston, my husband and I made many new friends who were just as supportive. Without all of the support and love, I probably wouldn’t be here to tell this story.

Knowing how fragile life can be, we as a family try to embrace everything life throws at us, be it
good or bad. While the bad things can truly be horrible, a lot of good can still come from them.

Heather Von St James is a 43-year-old wife and mother. Upon her diagnosis of mesothelioma,
she vowed to be a source of hope for other patients who found themselves with the same
diagnosis. Now, over 6 years later, her story has been helping people all over the globe. She
continues her advocacy and awareness work by blogging, speaking and sharing her message of hope and healing with others. Check out her story at the Mesothelioma Cancer Alliance Blog.