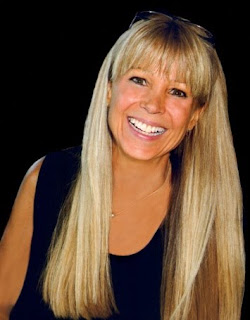 Combining a unique gift of powerful intuition and practical career know-how, 59-year-old Sue Frederick’s work has been featured in the New York Times, Real Simple, Yoga Journal, Natural Health, Fit Yoga, and Nexus Magazines. She’s been a guest on more than 200 radio shows and numerous TV shows including Bridging Heaven & Earth. Sue’s workshop venues include the New York Learning Annex, Omega Institute, NaropaUniversity, ShambhalaMountainCenter, LoyolaUniversity, CrossingsRetreatCenter and National Career Development Association. She’s the authorof I See Your Dream Job: A CareerIntuitiveShows You How To Discover What You Were Put On Earth To Do (St. Martin’s Press).

“I see clients from all walks of life from struggling single moms to successful Wall Street bankers,” Sue said. “Everyone is looking for insight into their true work and why they’re here.”

Sue was born in New Orleans to a French Cajun woman who came from a long line of intuitives. “I’ve had visions and dreams that come true down to the last detail since I was a very young child. It took me 50 years to learn how to embrace my gifts and use them to help others,” Sue remembered. “Our true guidance does not come from the mind and it is not ‘rational.’ Our intuition speaks through our body, our gut feelings, our hunches, our dreams and our deep inner knowingness. We all need to learn to trust that for our decision-making.”

Sue predicts that in 2012 the world will not end in the traditional sense but she predicts a major consciousness shift where, “We’ll have access to the other realms while still living in our bodies on this dense realm.”

A prediction for My Savvy Sisters.Com:Putting out positive energy and true work to the world always reaps huge success.

Here’s an excerpt her book:

I See Your Dream Job 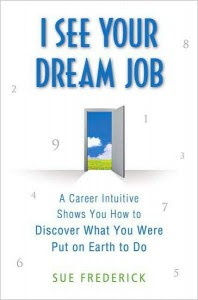 I’m a career intuitive, and I see dream jobs. When I work with clients, I see their gifts and potentials; what they came here to do; the careers they would love; and where they should live. This information comes to me as photographic images and strong messages that I transmit directly to my clients. Sometimes I see my client’s departed loved ones, who come to the session to offer career guidance.

This joining of two seemingly disconnected worlds–the divine realms and the world of work–seems to be my particular talent. I was born in New Orleans to a French Cajun mother who came from a long line of women with “the gift.” I inherited a double dose of telepathy, clairvoyance and precognition from her and her mother, and on back through generations of Degas women.

These unusual gifts were nurtured by the mysterious city of my childhood. In the haunted alleys of the French Quarter, most everybody gives respect to the “unseen” world in some form or other: voodoo, Catholicism, psychics, vampires, Mardi Gras. My early years were flavored with this spicy magic, from my Grandpa’s stories of the swirling Mississippi River to the unforgettable images I absorbed in the dark recesses of CrescentCity life. I thrived on the rhythms of my crazy Cajun ancestors.

And, like them, I heard other people’s thoughts and had vivid dreams of events that would happen in the future. My psychic gift is most powerful now that I use it to help others. The precognitive images that I see help me guide my clients to their true work. But it took nearly 55 years to embrace this ability to see the unseen world, and to learn what it had to teach–rather than being ashamed or afraid of it.

One of my strongest experiences in confirming the power of the unseen realm began in 1978, when I met and married a fellow mountaineer, Paul Frederick. We were crazy in love and planning a family when, at only 35 years old, he was diagnosed with colon cancer and given two weeks to live. From the moment of his diagnosis, we were determined to overcome it. We explored conventional and alternative healing methods, and quickly became immersed in energy work, visualization, herbal medicine and Native American medicine. Paul was part Cherokee, so his mother provided us with books and healers from the Native American tradition. She got us an audience with a famous Sioux healer, Chief Fools Crow.

Over the next few months, as Paul’s health deteriorated, I experienced many extraordinary other-realm experiences with him. Chief Fools Crow became Paul’s constant dream companion. Paul awoke each morning with a new story to report about something Fools Crow had taught him the night before. The most dramatic was Paul’s sudden ability to speak Lakota, the language of the Sioux.

In the last few weeks before he died, Paul woke up singing a Lakota death song every morning. He said Fools Crow taught him two songs–one to deal with the pain and one to help him die. When the doctors heard this strange singing, they thought he was either speaking in “tongues” or was delirious, and they reported this in his medical charts. In college, I had studied Native American history and was very familiar with the language of Lakota. I knew exactly what he was singing.

On a rainy summer day in July 1980, Paul slipped into a coma. For nearly 24 hours, the accumulated stress of the past year washed over me and, eventually, I fell asleep on the floor. As soon as I dozed off, Paul appeared in front of me. He was smiling and quite happy. He touched my arm and said, “Don’t worry. I’m free. But what are you waiting for? You said I could die in your arms.”

I awoke with a jolt and cleared everyone out of the room. Paul’s mother and I stood on either side of him. We rubbed his arms and legs and told him it was okay to go now–that we wanted him to be free. We told him to leave his body and fly out into the soothing summer rain storm.

As soon as we spoke those words, Paul’s breathing changed. He took one long peaceful sigh, and his spirit left his body. I saw it leave as clearly as you can see your hand in front of your face. It was an image I’ll never forget. It was Paul’s gift to me.

I could never again doubt the spirit world or my ability to see it. That final moment was a confirmation of what I was here to do. I realized for the first time that we are all in charge of how and when we die – even how and when we take our last breaths. And I knew with every cell in my body, that death was only a passage of the spirit into the unseen realms.

Today, I’m abundantly grateful for my work, which is my passion. My intuitivegifts are finally out of the closet, and I’m freely able to share them with others. The images and dreams that have always guided me are now guiding others through this work.

REVIEW: The Civilization Of Maxwell Bright (2005)
How To Survive- Getting Fired From Your Job
Ask Te-Erika For Advice
British TV Show Exposes Welfare Dependents; Viewers Disgusted