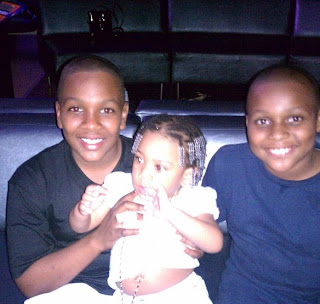 My boys are on Spring Break this week. They went to spend time at their Daddy’s timeshare and go to Disney World and all that jazz. I wish they knew how blessed they are, but they don’t, they think it’s regular to go to Disney, have cell phones and have a Dad who’s a lawyer and all of their parents friends are young Black professionals. It’s good to see a life change in the future of my children.

I dream about giving them more. In my mind, when I’m done with this life they will never really HAVE to work, but I’m sure they’ll build on what I have built for them and their children’s children’s children will wonder, “What was our family like before we had this empire?”

Hmm. That’s my dream, to change the financial futures of my sons and all of their kids after that. I don’t know how but I know it can be done. I Study, STUDY, STUDY success stories and really all it takes is ONE PERSON to learn how to create wealth and then to pass those habits on to their children. I haven’t reached the point where I have created any wealth for myself yet but Ill figure it out, teach them how, and then they’ll have to make sure they can sustain it. I’ve been brainstorming businesses to buy them so they can learn how to mange at a young age. Right now I’m thinking of a laundromat and a duplex.

My boys and I went out to the bowling alley with my sister and her man the other night. It was rave bowling. It was so much fun. I hate bowling, I hate games in general but for some reason I had so much fun that night that I wouldn’t mind going again.

I always feel like I’m super high when I’m with my sons. Having them in my presence feels better than any orgasm I’ve ever experienced. Nothing feels better. I can’t imagine how any mother puts her man before her kids because men make me feel sad all the time, I’m always disappointed, but with my kids, it’s all love.

I called their Daddy up the other night just to talk. I think I scared him. Ok so he has a girlfriend. My boys adore her. She’s better than the last girl he had. I have no issues with her or the fact that he’s with someone else. I used to, back when I thought that him being with someone else meant that something was wrong with ME. I don’t think that way anymore.

I used to think I was a victim and that he had all the power but not anymore. Sometimes I find myself becoming angry at the things he put me through but I’ve learned to not be mad anymore. People who try to hurt you will only get satisfaction if they see that they did. I used to give him the satisfaction but that day is gone. When I think about him, tears come to my eyes because, believe it or not, he’s an awesome Dad. He’s so different from me, in all the ways that my sons need. I would have spoiled them and had them crippled in life because I want to give them ALL THE LOVE, but he makes them take care of themselves and be responsible and keeps them accountable.

He sows a lot of his time into their lives. He manages his job and our two boys plus he has another daughter too. He’s so good at it all. I can’t believe I’m writing this but, I admire him. I did a good job with choosing him when we dated back in college and I didn’t even know we would be tied together forever. I hear so many horror stories about baby daddies and mine used to be a horror story until I stopped thinking I was a victim and started making the most out of the situation. When I stopped thinking I was a victim, I stopped being one.

I’ve learned that shit doesn’t really have to turn out like you expect it in order for it to be GOOD. Surprises can be good too. Twists and turns in life can end up being great. Someone walking out of your life or telling you they don’t want to be a part of it in the way you want them to could ultimately be the best thing that ever happens to you. I’ve learned to let go. I’m okay with not having what I want from life. Maybe if I had gotten exactly what I wanted from him or what I expected from life, I wouldn’t be as happy as I am at this moment.

I have healing in my life and I don’t hurt anymore over him or any man. I’m good. My boys are great and maybe some of my dreams might even be coming true. You never know.

Johanna Crawford Offers a Hand Up to Domestic Violence Victims
Why The Community Care Facilities Ordinance Will Impact My Life In Shared Housing
Te-Erika's Diary: What's On My Bookshelf?
Is Youtube Sensation Taren Guy An Embarrassment to Black Women?