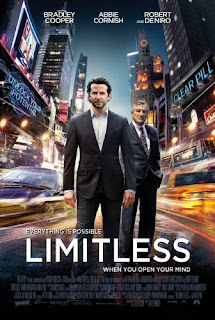 Limitless is an American techno-thriller film directed by Neil Burger and starring Bradley Cooper, Abbie Cornish, and Robert De Niro. It is based on the 2001 novel The Dark Fields by Alan Glynn with the screenplay by Leslie Dixon.

While the premise of the movie is based on a myth that we only use 20% of our brain power, Limitless incites a philosophical question that urges the viewer to think smarter.

The lead character is a man who is at the end of his wits, literally. He is failing in his career and his love life and can’t seem to start his book after receiving a hefty contract. When he happens upon his ex brother-in-law his life shifts permanently. His brother introduces him to a drug called NZT-48.

The effects of NZT-48 cause Cooper’s character to utilize 100% of his brain which enables him to retain and recall key information at a moment’s notice which allows him to think his way out of precarious situations and become an overnight success in the stock market. Not only is this pill the gateway to his success, it places him in immediate danger as he is the only person left with any known supply and other key figures in finance have been found to have used this drug too.

There is a little bit of a love story due to the fact that the lead character’s girlfriend keeps popping in and out of his life but it’s not really worth mentioning, so I won’t.

Gangsters and blood baths, corruption and white collar villains abound in this light-hearted thriller. Guys will love the fight scenes but they aren’t intense enough to be a turn off for women. Although Limitless was just as gory as other drug related movies, for some reason I wasn’t sucked into the mayhem and negativity. I didn’t emotionally connect with the lead character’s frustration at all. Instead I focused intently on the choices Cooper’s character made with his newfound intellectual capacity.

If you could learn anything and use your knowledge to have an extreme advantage over others, what would you seek to learn first?

The real question is one that we used to ask as children: If you had one wish, what would it be?

The SMART answer is: I’d wish for more wishes. The lead character does just that, making all the right moves in the knick of time to position himself to live out the life of his dreams.

Watch this movie. It has a surprise ending that will make you smile and shake your head.

For My Savvy Sisters: If you had the capability to far exceed your own intellectual limitations, what would you want to learn first?

How To Survive- Facing A Foreclosure
Taking Your First Step Toward Your Goal
Ease Your Fears With Detachment
ADVICE: My Boyfriend Uses Tinder & It Hurts Me