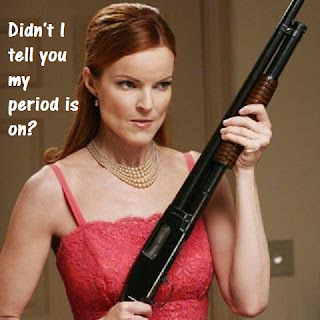 The Diagnostic and Statistical Manual of Mental Disorders (DSM) is the guidebook for diagnosing mental disorders. The fifth edition of the list of symptoms that allow doctors to label patients as mentally ill is now updated and will be released this month. According to the PMS Comfort Blog, the DSM V may allow symptoms associated with PMS to be included in the main section as an official mental disorder called Premenstrual Dysphoric Disorder.

Since the beginning of time, women have dealt with the many emotional surges associated with their menstrual cycles and now doctors have created a remedy that they call SaraFem. SaraFem is a drug that can be issued to women who experience the normal symptoms of a woman’s body cycle. The scary part is, according to the Katherine McCormick, the CEO of Australia based Utopia Research Institute, SaraFem is another form of the anti-anxiety drug Prozac, repackaged to appeal to women, a move Katherine calls “crazy” in itself.

Do not fall for this. You are a woman, you are supposed to experience the emotions of life. You are not mentally ill because you have the proper reproductive organs to reproduce. Do not accept this diagnosis which can not be measured in any scientific way and therefore can be handed out at the psychologist’s whim in an effort to quell any complaints. Your symptoms will appear to disappear after taking this drug but that will be because you will be too high on the drug to experience them.

My Savvy Sisters don’t take drugs to manage our emotions. We live them. We accept them. We handle our issues internally. ~Te-Erika Patterson