Home
Rebuild Your Life
Strategic Efforts & No One Cares- Is It Because I’m Black? 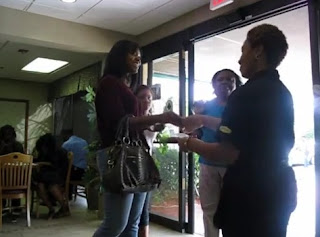 Organizing the partnership between The Rebuild Your Life Project and Denny’s Restaurant wasn’t exactly a smooth process. I had to articulate my vision for a hiring event that would collectively offer job interviews to the South Florida community on a wide scale basis and a 5 member team from Denny’s corporate had to revise and refine it.

My goal was to have each Denny’s restaurant in Miami-Dade and Broward counties to participate and have community members in need of employment come into the stores on a specified day during specific hours to be interviewed. After I was asked to send in an additional proposal to my district manager, he hosted a conference call with a member of Denny’s marketing team and four other people who would offer insight, including his boss.

That morning during the conference call, I shared my ideas and vision and we all went back and forth, offering input and scaling down the project. Denny’s suggested that we open up the interviews to everyone so that we wouldn’t discriminate based on gender and they reminded me that every Denny’s restaurant in South Florida isn’t a corporate owned restaurant so getting the franchise restaurants on board would take some time, if it was at all possible.

We set a date for the hiring event – December 20th, 2011- and the public relations specialist asked me to send over a brochure to send to all of the franchise stores so that they would have information about my project.

The next day I drafted another proposal that detailed my idea along with the revisions that we discussed and I emailed it to the marketing manager, Chris Nichols. I didn’t hear back from him for another two weeks and I began to get nervous so I contacted the corporate office and was given his direct phone number. He answered promptly and assured me that things were progressing and that in a corporation, things take time to be approved.

I felt better, but was still nervous because I am a complete control freak when it comes to my work. During The Rebuild Your Life Project, I had to do all of the writing for the marketing campaign myself, while I navigated through the homeless lifestyle, organized my job fair, did interviews to learn from the homeless people I met, did research on how to survive homelessness both physically and mentally and shot and edited videos that I posted daily on youtube. A one man band with a million tasks on my daily to-do list, not including dealing with the psychological ramifications of being homeless, I was in over my head during that project but I survived.

The knowledge that I can overcome anything still didn’t stop my panic attacks as I checked my email waiting for word that everything was running smoothly with the partnership with Denny’s. Just five days before the event was scheduled, I received the unofficial press release announcing the event and I breathed a sigh of relief.

My vision had been adjusted in a few very smart ways. There wasn’t enough time to gather participation from the franchise stores so the district manager of the Miami-Dade restaurants and Broward country restaurants pledged their participation. Instead of having the open job interviews inside the 14 participating stores, there would be two locations that offered the hiring event, one in Miami and one in Broward. During the event, the general managers of each restaurant would be present to interview interested candidates.

The press release from Denny’s was finally approved and I sent it to my media list. There were several local African American publications that I sent the press release to as well and I was simply shocked by the response I received from one editor.

“This is great and we commend Denny’s however what Black american newspaper does Denny’s advertise in?” he wrote to me.

“I am not certain. I am certain, however, that your readers will benefit from this news. It’s your call of course,” I wrote back.

“I know,” he wrote back. “We have to have advertising to get information out to our readers. It’s a fine line however that’s why we believe in relationships and at this point we DO NOT have one with Denny’s.”

The next day I was pleased to see that this particular publication did indeed run the press release anyway. It was my first clue as to the yet undiscovered racial tensions between Denny’s restaurant and the African American community.

The event went on as planned and I made this video to capture the monumental event.

I was shocked that absolutely no one from the local media decided to cover the event. In fact, if I had not made this video there would be no documentation of the turn-out at all. Through a connection I made during The Rebuild Your Life Project, Hot 105FM host Rodney Baltimore announced the event two mornings in a row during the Tom Joyner Morning Show (a long standing radio program with a focus on the African American community) and nearly every person I met that day informed me that they had heard the announcement on the radio.

At the end of the job fair, which I hosted from the Broward country location, my district manager informed me that 40 people were interviewed in Broward and 62 people had been interviewed in Miami. I was elated and excited about the people who would become employed as a result of our efforts, yet I was confused as to why the local media were not interested in covering a story about an international corporation that was offering employment opportunities 5 days before Christmas.

If I sent out my press release to all of my media contacts and Denny’s did their part in marketing the project, at least ONE media outlet should have been interested- right?

I rarely watch television because most of what’s on has nothing to do with my personal goals or plans so I don’t care, but while visiting my Mom I saw a story on the news about a national chain store giving a woman a free Christmas tree.

Wait. A chain store gives ONE woman a Christmas tree and they get a whole segment on the nightly news and my event wasn’t covered by anyone? This doesn’t sound right.

I began to blame myself, thinking maybe it’s me. Maybe because I have been such a flaming failure at life, some of that energy has tainted my project too. I began to doubt the value that the life lessons I taught as I conquered homelessness and advocated for women would bring to the world.

In my mind, I did something great, but no one in my hometown, at least not the mass media, seemed to care.

Maybe it’s me. In my mind, I’m awesome but no amount of effort seems to matter. No matter how much I push, I still get the same result.

An opportunity to shift the blame came when I was invited to participate in a structural organization committee for an African American centered event. During a phone conference I introduced myself and shared my professional experience as a writer and the work that I had done to empower women during The Rebuild Your Life Project.

“You’re partnering with who?” one of the committee members asked me.

Another phone conference participant chimed in. “If you partnered with an international corporation and actually did what you said you did and it’s not on CNN, why do you think that is? You’re a WAITRESS, helping people to get jobs. That’s national news.”

“Did you know that Denny’s had a class action lawsuit filed against them a while back?” he asked.

“For racism,” he continued. “Denny’s doesn’t support the Black community.”

What? I was confused. “But they said they would support this. We did all of this work together.”

After offering my input to their project, I hung up to draft a proposal for them but as I typed my thoughts were racing. Their words had impacted me more than I thought. The negative energy they passed along had taken root and attached itself to my spirit. I’m already a paranoid person, I don’t like fear being added to my mental state by others.

The next day I devised a plan to contact the local media myself and ask them why they weren’t interested in covering my event. It would be a report on why good news isn’t fit to be news, at least that was my plan. When I shared my plan in an email with the marketing manager Chris Nichols, he told me that he’d call me and we had a 30 minute phone conversation.

I asked him why he thought the media wasn’t interested and he said that the press can choose which stories to cover and he didn’t think I should be so aggressive in seeking out answers from them.

“Well, when we find out how many people were actually hired, can we do another release announcing the success of the event?” I asked him.

Then I brought up the issue about the racial tensions and he listened and offered his thoughts.

A long time ago Denny’s was involved in some racial tensions and there was a law suit but most people don’t know that the people who were involved in that don’t even work for our company anymore, Chris shared. He said that Denny’s had worked hard to gain right standing and had even hired someone to make sure that they have healthy connections within the various ethnic communities.

I hung up feeling more confused than ever. If Denny’s did their part in marketing and I did my part in marketing, then how did this fall between the cracks? Does it have something to do with the fact that I am Black?

Wait a minute. I don’t think like this. I never allow my skin color to become a reason why I can’t have my dreams fulfilled. I never blame my ethnicity for my losses.

This internal debate sparked my creativity as I desperately tried to shake the negativity that clouded my joy.

I made this video that gently urged the African American community to release the mentality of victimhood and take personal responsibility for their own lives. I’d rather blame myself than give anyone the power to say they stopped me from doing what I wanted to do.

And then I waited to hear back from Denny’s about the number of people who were actually hired as a result of The Rebuild Your Life Project partnership with Denny’s so that I could try to market it again. As I waited, I devised another plan to take this initiative to an even bigger level.

What if I could get other big businesses to partner with The Rebuild Your Life Project to offer a mass hiring event? What if big businesses across the nation decided to take part and people were offered the opportunity of a lifetime, the one break they really needed to rebuild their lives during a time when the average man believes that big businesses don’t care about them?

Who could I get to help organize and lead this initiative that would make the biggest impact? Who has already devised plans to create jobs for Americans? Who cares about this topic?

I sat down and drafted yet another proposal. This time it began-