The other day I read that it was the 15th anniversary of the movie Love Jones. This is a film that is highly regarded in the Black community because it is said to depict a real life romance

Wow. Anyway. I was 18 and in my first year of undergrad and I guess I was having too much fun to see this film but I have seen some scenes from it. After reading the interview with the main characters about this film, something made me say, “If I were to star in a movie, I’d like it to be one like this.”

Then my thoughts flowed to- If I were to star in a romance film, who would I want as my romantic interest? I laughed and laughed at the thought of some man pursuing me, even in a film. It doesn’t happen in real life, but it could happen in a movie that begins in my imagination.

So who would I like to play my male lead? Ooh! I know! Jaleel White!

I just saw him a couple of weeks ago in the film Judy Moody and the NOT Bummer Summer. It rekindled my childhood crush on him and reminded me that he is still the STEVE of my fantasies.

Then I asked myself- Wait. Why does it have to be a MAN that I am linked to in my romantic movie? Since I don’t crush on women based on their looks, nope, no celebrity crushes on women at all, I had to find an actress.

A quick google search to find the perfect lead actress led me to Zoe Saldana. Wow. She’s so beautiful she probably wouldn’t look at me twice, but this is my imaginary love story and I get to choose whoever I want. So there.

As I manipulated their images to sit next to each other my mind started whirling with ideas about what would happen. 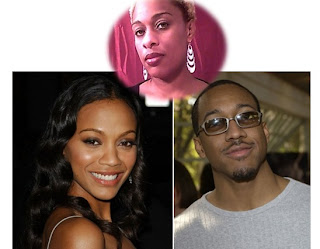 The ideas wouldn’t stop as the story developed so I began writing notes based on what my intuition was telling me.

The movie description popped out.

Brandi (Te-Erika), a down on her luck waitress blacklisted from the acting scene in Miami, LA and New York due to her wayward ways hopes her luck will change once she moves to Washington DC.

In the Chocolate City she doesn’t find the connections she needs to make it to the big screen but she does find a new talent and a new dilemma as she is thrust into a tug of war between two charming singles, Derrick and Sasha (Jaleel White & Zoe Saldana) who vow to break her out of her promiscuous ways by offering her the one thing she has never experienced- love.

Today, as I sat staring at the picture of this love triangle I heard- Develop your characters by writing out the details of their personalities.

Now that my list is done, I’ll just sit and wait for the rest of the instructions. I am a bit nervous because I am not sure what this project will turn into or even if I’ll have the time to dedicate to it with so many other things on my plate.

The crazy part is, the last time I was inspired to write a fiction love story that I starred in, I actually met a man just like my main character. They had the same background and everything. What if my writing is magic? What if I do it again?

I am curious to find out!