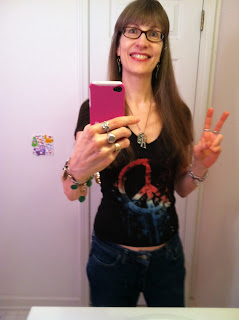 MySavvySisters celebrates women who love to showcase their personalities through the creative arts. This Pulitzer Prize nominated Pagan Erotica novelist is one of the most intriguing women we have had the chance to encounter.

MSS: If someone asked you to describe yourself in one sentence what would you say?

Laura: I’m the Hooker with a Heart of Gold.

MSS: Those who love you the most love you because…

Laura: I’m a sweet Beta and all heart. I also never back down. When lemons come my way I make lemonade. Period.

MSS: What led you to begin writing erotica with such an interesting slant?

Laura: I’m a Wiccan Faery Witch, Otherkin Fey, and a sexual sorceress. That makes me a SexWitch, which is how most people on the web know me (the “SexWitch”). Sex is not only my career, but I have a raging hot libido, and I’m kinky as hell. As a novelist, I thought it was time someone wrote fiction that portrayed Pagans realistically. Not to mention Pagan men are some of the sexiest in any universe. Yum! For many people Witches, vampires, shapeshifters, and Fey are “paranormal.” For those of us who are Pagan and half human (Otherkin), those kinds of beings are “normal.” So my career choice was a natural for me. ~lol~

MSS: Briefly describe paganism and why it empowers you as a woman?

Laura: There are all kinds of different Pagan paths. Some are spiritual, some aren’t. I’m a Wiccan. Wicca works for me because we follow two rules: 1.) The Wiccan Rede (do as you will as long as it hurts no one) and 2.) The Rule of Three (whatever you say, do, or think will come back to you 3-fold). I’m a royal Seelie from the High Court. The Seelie are known for their code of honor, so being Wiccan jives well with that for me. Most Pagan paths are feminist in that we worship one or more Goddesses from a variety of pantheons. When people ask me about Wicca, I tell them it’s a basically peaceful, feminist, nature religion.

MSS: What is the most misunderstood aspect of your lifestyle and how do you help people to understand it?

Laura: Today is a good example. A woman I know found out who I am (the best-selling Pagan Erotica Novelist in the world). She’s a funde Christian. We have always gotten along well. Today she treated me like the Devil’s Spawn. I can understand why she thinks that. There have been waaaaaay too many false rumors spread about Pagans for the last 2000+ years by the major religions. Plus, I live in the Deep South Bible Belt. When she decides to talk to me again I will tell her: 1.) Pagans don’t worship the Devil (or Satan) because we don’t believe in him and 2.) Christianity invented the Devil, not Pagans.

As a Wiccan, I’m what they call a “White Witch.” We go around doing good all day. I often say a White Witch is the best friend you could ever have since we live by the two Rules I mentioned above. Just imagine how different the world would be if the major religions lived by The Rede and the Rule of Three? 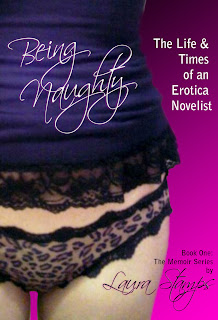 MSS: Can you describe the process behind organizing and writing your books? What inspires you?

Laura: I write 3 fiction series and one nonfiction Memoir series. “The Witchery Series” is the main fiction series. It is the only one that is not erotica. That’s because romantic erotica didn’t become popular until after 2005. The first book in this series (The Witches of Dixie) is an anthology of the first 4 novels and novellas in this series written from 1997 – 2003 and published by other publishers who eventually went out of biz (like many publishers do).

When I sold the series to Trytium Publishing in 2007, he put those 4 books together in one book. That novel is the only one of mine with no sex or romance because of the time period in which it was written. Instead it is very empowering for women and incredibly magickal. It’s actually one of my fans’ favs. The next two novels in that trilogy were published in 2007 and 2008 with Trytium. The second is a romance, and the third is erotic romance. All the other series (The Rune Witch trilogy and The Manigault Vampires) are erotica, and are spin-off series from this one.

My novels are all character-driven. The same cast of characters wanders through each one no matter the series, so readers never feel lost. All are Pagan and empowering, containing real spells, chants, and rituals. Because my books are character-driven I allow my characters to tell their story. They rarely follow an outline so I don’t use one. They determine how long a book will be.

Because I started out in this biz 24 years ago as a poet, all my novels are handwritten in one spiral notebook after another until they are finished. A novel usually takes a month to write in first draft this way. I just figure out the hero/heroine, the plot, the climax, the ending, set the scene for the first chapter, and let my characters tell the story. Several universities collect my papers and archives, and they love the handwritten notebooks. Then I begin the tedious process of editing. That usually takes 8 months for a novel because I am a meticulous editor, and my readers expect a high level of quality from my books.

MSS: What role does romantic love play in your life and work?

Laura: Love is my magickal energy and my destiny. Love is the most powerful form of energy in any universe. Romantic love is everything to me. My novels are all romantic. I’m a very sexual woman. I want to be loved and appreciated by a man. Lust and sex go together for me. I can’t and won’t separate them. And I won’t settle for less.

MSS: How do you define success and how do you suggest other women define it?

Laura: Success is any goal you achieve, large or small. I was an artist before I changed careers at 30. I had always been told I had writing talent when I was in high school and college but I am also dyslexic. Painting was easier for me, and I won lots of awards for it. My paintings are still sold worldwide by my fine art publisher in California (Haddad’s Fine Arts, Inc.) as prints and posters.

But by the time I was 30 I gave up the struggle and taught myself how to write. That is success because it took 4 years. Since then I have published 53 books with various publishers. My stories and poems have been published in over 1000 magazines and anthologies, including the 2004 anthology “Open My Eyes, Open My Soul” edited by Yolanda King, Martin Luther King’s daughter. In that book my poems are next to those by Maya Angelou, Muhammad Ali, and Stevie Wonder. I was also nominated for the Pulitzer Prize in 2005, and my resume of awards and honors is over 80 pages long. That is success for a dyslexic.

In 2009 I went with an agent who also had Donald Trump as a client. I was trying to reach the next step in my career. I was approaching 50 and tired of working my cute little ass off 24/7. Instead he killed my career. By the time I dumped him in 2010 I was just about ruined. He had let me go 16 months without a new book being published, and I lost almost all my fans. My income was down to $30 a month in royalties. At the same time my husband fell in with a bad crowd, and my marriage crashed. It was the kind of complete and total disaster some women never recover from.

What did I do? I stopped talking for a week while I took a look at what had happened. It scared the daylights out of everyone close to me. Then I said, “Fuck this shit!” I hit the ground running and I took control again, working my ass of until 4:00am every morning 7 days a week for 18 months. I went into ebook, built up my fan base, and became the best-selling Pagan Erotica novelist in the world. Now my books spend more time on the Kindle bestsellers lists now than off. I was blessed by the small group of fans who did stick with me. I was blessed to met an incredible woman with the techy skills I needed (Alex), and she helped me enter the ebook market with my company, Kittyfeather Press. I also re-signed with Trytum for paperback rights of “The Witchery Series” after my ex-agent bought my contract out the year before. That is success for a woman whose career and personal life were destroyed by clueless Alpha men.

In 2011, I burned out twice from exhaustion, my fiancé died, and by the end of the year I had met and fallen in love with a wonderful sweet man. My goal this year is to cut my schedule back to humane hours and make room for my incredible love life with this man. Each time I get closer to this goal that is how I define success at the moment.

In April I will be 55. I’m a runner and an organic vegetarian and model in my trashy panties for the covers of my Memoir Series. It’s been a helluva ride, and it ain’t over yet! ~wink~ Like I said, success is any goal you achieve, large or small. Women achieve both kinds every year. And every time we do we should celebrate because we are AWESOME!!

Vibe with the Sex Witch by visiting her on: