Home
Must Reads
Breaking The Cycle of Teenage Pregnancy

“No matter how much talking and bopping them upside the head you do, they still have to make the decision on their own.” ~ Tarmika Patterson

She was 16 when she took her first pregnancy test. She was in love, or so she thought, and figured that having a baby with him would make the relationship last so she never considered abortion. Seventeen years later, 33-year-old Opa Locka, Florida resident Tarmika Patterson is celebrating her eldest daughter’s birthday and the fact that of all the women in her family, her daughter is the first one who didn’t become a mother before 10th grade.

“My Mom had me when she was 19, but she had my older sister when she was 16. Her Mom had kids at an early age too,” Tarmika remembers. As a teenager at William H. Turner Technical High School in Miami, Tarmika says she was afraid to have sex but also curious about what the mystery was.

“I heard all of these rumors from friend girls who said they were doing it. I felt like I was in love and he was pressuring me so I did it,” she says. “It was not all hyped up like they told me it was. I could have waited.”

Tarmika’s mother knew something was wrong when she didn’t have to buy as many sanitary napkins during the month for her four teenage daughters. “She approached me and my sister Poochie late one evening and said, ‘One of you must be pregnant,’” Tarmika recalls. “I looked at my little sister Poochie, who was 14 at the time and she looked at me. Neither of us said a word because both of us were pregnant.”

This is why last week Tarmika proudly celebrated her daughter VionShay’s 17th birthday with a photo tribute that read: We Finally Broke The Cycle.

Was there anything Tarmika’s mother could have done to prevent her daughters from continuing the legacy of teenage pregnancy? “It was about communication,” Tarmika asserts. “My Mama didn’t communicate with me about sex or anything. First of all, she could have come to me and told me that when you get your period, you can now have a baby. She could have told me about protection. She never really sat me down and talked to me about my body, about boys or becoming a woman or STD’s, none of that.”

Besides not having an open communication line with her four daughters about sex related issues, Tarmika bore the weight of low expectations from other family members. When she gave birth to her first child at the age of 16, Tarmika remembers her grandmother visiting her in the hospital and cooing over the newborn. “She’s so pretty,” her grandmother stated. “Wait around, she’s gonna have her baby by the time she turns 10.”

Tarmika was crushed by the thought and decided then and there that her daughters would not fall into the same trap. It was during a visit to the emergency room for an upset stomach that she first introduced her daughters to sex education. 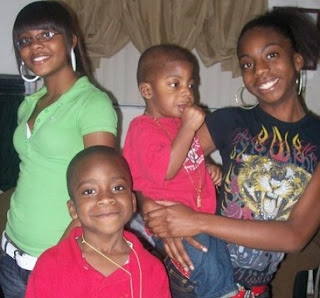 “My girls were five and  three years old and they were with me in the emergency room. When the doctor gave me a pregnancy test and they asked about it, I told them about how women get pregnant,” Tarmika shares. “As they grew older I made it a point to teach them about all the ways sex could go wrong. I would get on YouTube and show them videos of women having babies. I would even look up websites that showed pictures of STD’s and show them the pictures. I talked about the things that I missed out on because I had children so early too.”

“I always tell them if you have sex let me know first so I can have the boy tested for STD’s, both of you can go together,” Tarmika says. “I never try to tell them not to have sex because I feel like if you drill that in their head, that is what they are going to do.”

Although her childhood dream was to become a teacher, Tarmika is now studying nursing at Miami Dade College while she cares for her four children VionShay, 17, Joe’Kwanna, 14, Tyrese, 8 and Tyrele who is 4 years old. She uses her creative ability to create gifts, decorate and plan events to bring in extra income while her husband of 8 years supports the family.

VionShay, who is a junior in the medical magnet studying dentistry at Miami Northwestern Senior High School, has also been a cheerleader since the 9th grade. During report card time, Tarmika proudly posts pictures of VionShay’s report cards on Facebook so the world will know what an awesome daughter she has. 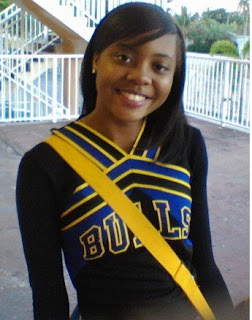 VionShay feels the same pride about her Mom. “She’s always talking to us and telling us stuff,” the 17 year old says. “She’s really involved, which can be annoying sometimes, but I get it. She really cares.”

While Tarmika celebrates one daughter who has broken the cycle of teenage pregnancy, VionShay’s rambunctious 14-year-old little sister Joe’Kwanna “Kwannie” is at the stage in her life where she thinks she knows it all. “I’m still working on her,” Tarmika says. “Kwannie is a whole different story.”

For mothers of teen daughters that are trying to teach their daughters not to make the same mistakes they did Tarmika says to do what you know to be right and true, communicate with them about the dangers of teenage pregnancy, tell them what you expect for their lives and don’t be so hard on yourself if your daughters still make poor choices because, “No matter how much talking and bopping them upside the head you do, they still have to make the decision on their own.”

My Savvy Sister of The Week- LaShanda Henry
Te-Erika's Diary: Weight Loss Woes
Why I Self Diagnosed With Aspergers
How to Have Perfect Peace in Your Life
Tweet Pin It