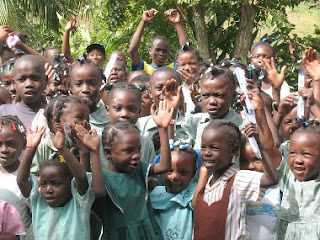 An estimated 3,000 children in the Port-au-Prince neighborhood of Croix Deprez, a hilly area where many homes collapsed in the earthquake, are benefiting. The program, which targets children and youth ages five through 19, provides vouchers to cover the cost of school fees. In addition, participating families will receive a cash grant of $100 per child to cover the cost of school-related expenses, including transportation, uniforms and lunch.

“This is a terrific program,” said Matthew Marek, head of programs for the American Red Cross in Haiti. “Children get an education, and cash-strapped families can use their savings for other pressing needs.”

The program pays students’ school fees for the remainder of the current academic year. To be eligible for the school vouchers and cash grants, families must live in one of three camps in the Croix Deprez area, and have enrolled their children in primary or secondary school by a January 2011 deadline set by the Haitian government.

Nearly 200 area schools are participating in the program. Many of them lost a large number of fee-paying students after the earthquake because families could no longer afford to send their children to school. Now, thanks to the American Red Cross funding, they have the income to pay teachers and staff. The program is being implemented with approval from the Haitian Ministry of Education.

Haiti has one of the lowest literacy rates in the world. One challenge for families is the lack of funds to pay for private schools, which make up the bulk of the Haitian education system. In many cases, school fees exceed $140 per trimester per child. Prior to the earthquake, which left more than 230,000 dead and left more than 1.3 million homeless, more than two-thirds of the Haitian population lived on less than $2 a day.

The American Red Cross has long supported school-based initiatives in the U.S. and around the world. For decades, the organization has worked with and in schools on issues including disaster preparedness, health and safety education, food assistance and psychosocial support.

Educated Immigrants Moving Back Home For Job Opportunities
When You're Above Average
How to Survive: Leaving An Abusive Relationship
How to Deal with a Loss