Home
Rebuild Your Life
REBUILD: Letting Go Of The Past 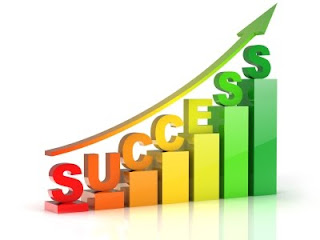 I had to take a break from cleaning. Although I’ve moved around so much that I couldn’t imagine keeping up with so many things, I had a lot to throw away. These papers and books and momentos were things I had collected since I was a pre-teen.

I laughed at most of the stuff, realizing how far I have come but then I realized, here I am at a brand new beginning and none of these awards or essays or pamphlets matter now.

What did all of this “stuff” really mean?

It means I spent a lot of time trying to become who I wanted to be. I found a pamphlet that I made when I first thought I was qualified to be a speaker. It was called, Design For Destiny. I smile now as I look over my resume from back then.

I also found a pamphlet I made back when I was in college and pregnant with my second son. I was so angry and so hurt over my break up with their father that I had to do something with that energy so I pushed it into creating a resource and inspiration pamphlet for women who were pregnant and considering abortion. I called it Surprise! It’s a Miracle. I made it to encourage women who were considering abortion because they didn’t believe they could handle the responsibility of a child. 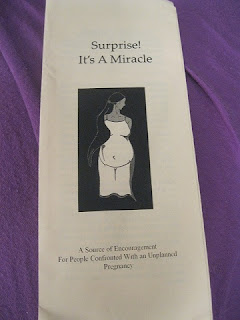 I had a thousand copies made and I drove around my college town distributing them in every women’s center I could find. I left a stack at the abortion clinic too. I even started visiting shelters for pregnant teens and hung out and encouraged them too.

One day I was at home hanging out with my son when I received a phone call. It was a man who was a representative for a pro-life group on campus. He told me that he loved my pamphlet and asked if he could distribute it around campus. I gave him permission but I had no idea that he would send it to over 42,000 people!

They wrote a story about me and my pamphlet on the front page of our school newspaper. I was blown away! During my last semester of school I entered a magazine design class and a young lady recognized me from the news story and she said, “Are you Te-Erika Patterson?”

“Hi. I’m Melissa. I want to show you something.”

She fished around in her bookbag and produced a key ring. On her key ring was a picture of a little girl.

“This is my daughter,” she said. “I want to thank you for making that pamphlet because when I saw it I was pregnant and then I knew that I could handle it. Thank you so much.”

I was overwhelmed with joy. I couldn’t believe it. Something I created had impacted someone’s life!

And all of this time I’ve just been hammering away at my goals, making videos, writing articles, trying to help in any way I can but it seems that I can’t help myself. I’m consistently low-income. I am consistently on food stamps. Ramen noodles has been a staple in my diet for years.

Working as a waitress at Red Lobster and Denny’s was my saving grace while I was in grad school. =) ~singing~ Food, Glorious FOOD, hot sausage and mustard!

I guess I’m saying all this to say, all of this HAD to be for something. Although I have nothing to show for it, I’m still reaching out to you. I created this site and I’m trying to make it bigger and trying to reach as many people as I can so they can get the help and the leg up that has eluded me.

So tonight I went through my past. I threw away all of the term papers and research and love letters and photos and cards from over the years and I threw them all away. Ofcourse, the bags dropped and split open as I carried them outside. 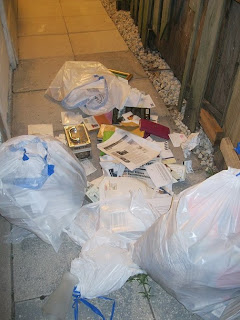 Goodbye old me. I’m proud of you no matter what. You tried. You didn’t give up. You set goals and you accomplished them and you experienced life on your own terms when no one else agreed. You tried your best and I am so proud of you.

Somehow I feel like this Project is going to be the beginning of the next phase of my life- whatever that means.

Te-Erika's Diary: My Intuition Says Write A Movie
The Rebuild Your Life Project Summary
My Savvy Sister of The Week- Sandi Amorello
Hoping To Find a Good Fit