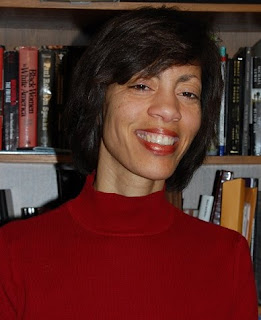 Sikivu: I grew up in a secular household, so I had a leg up on skepticism, freethought and intellectual curiosity. Both my parents were what I would call “activist scholars.” Some of my earliest memories coming of age in South L.A. in the 70s and 80s were of going to demonstrations, public forums and meetings on social justice issues relevant to the black community, particularly around the pervasiveness of police terrorism and police misconduct during that era. I was also exposed to authors, intellectuals and historical figures of African descent (many of whom embraced freethought) very early on, so this became my moral foundation.

My parents ensured that I had literature from black women thinkers and writers. My father gave me my first anthology (by Mari Evans) on black women writers in high school and my mother was a nationally esteemed English teacher heavily into forerunning womanist/feminist writers like Toni Cade Bambara, Alice Walker and Toni Morrison. These were my values. Consequently, Christianity, supernaturalism and belief in God really had no bearing on my sense of ethics, justice, fairness and identity.

MSS: Outing yourself as an atheist in this society could be painful and scary. Why is it important to you to share your views on spirituality or the lack thereof?

Sikivu: My world view as a non-believer and a humanist goes beyond the question of spirituality. There have always been black free thinkers and secular humanists who have challenged the ways in which Western notions of personhood, public morality and Manifest Destiny-style justice pivot on racial/sexual otherness and the imperialist dehumanization of people of color. The dominant culture simply doesn’t acknowledge these traditions as being a legitimate and culturally relevant part of black intellectual history and social thought. For example, mainstream discourse fetishizes black religiosity and deifies MLK as a strictly religious figure and thinker without reference to the humanist underpinnings of black liberation struggle. So my charge is to bring secular humanist traditions to the fore and contextualize them in terms of the human rights struggles that people of African descent are still waging in this so-called era of American exceptionalism, post-racialism and post-feminism.

MSS: Who is your target audience and how have they received your philosophy so far?

Sikivu: My target audience is those who are open to a different take on American social thought and the insidious moral regime that has been institutionalized by the Religious Right and its allies across the political spectrum.

MSS: Is Feminism an anti-man movement? In your eyes, what is it?

Sikivu: The idea that feminism is “anti-man” is an absurd caricature. In its most radical humanistic form, feminism is a movement for the recognition of the absolute human rights of women, their families and communities. It seeks to break down heterosexist and patriarchal models of masculine and feminine that straightjacket all genders into binary oppositional roles. Patriarchy and sexism damage boys and men because violence, domination and control over women and other men become the most “authentic” ways of being male. So, for example, feminism is a useful lens for assessing why homicide is the leading cause of death among very young African American men.

Because men of color are denied living wage jobs, jim-crowed in the educational system and over-incarcerated due to racialized sentencing disparities they have been socialized to believe that killing someone that looks like them, in order to validate a sense of manhood, identity and worth under dehumanizing conditions, is not a major barrier. Patriarchy, institutional sexism and heterosexism work in concert with each other to further institutionalize racial inequality by establishing a racial hierarchy of men and women. While violence against all women is naturalized, violence against women of color is perceived by the dominant culture as “less” heinous and more justifiable because the lives of women of color are not as valued as white women’s (which is exemplified by everything from America’s cult of missing white women to death penalty disparities for white murder victims versus black murder victims).

MSS: Where do you meet other people who share your views and insights?

Sikivu: While I don’t know scores of non-believers personally I have met many folk who have problems with organized religion and religious dogma. Some consider themselves “spiritual”, the alternative term du jour, some agnostic, some religious humanist, etc. Many of the “out” non- believers of color I’ve met have been through conferences, talks I’ve given, or online.

MSS: How do you deal with the religious pressure you come across?

Sikivu: It depends upon what the nature of the interaction is. If someone asks me what church I attend or what did I do/cook for Easter, etc. I’ll tell them nada and that I am an atheist. This generally elicits one of two responses: subject avoidance or stunned silence, followed by a volley of sputtered questions. If someone keeps trotting out religious homilies or adages in a way that presumes I’m a believer I’ll gently disabuse them.

MSS: What is your central message that you want people to understand by reading your book?

Sikivu: That freethought and humanism go beyond rejection of organized religion and demand a principled activist stance against the Religious Right’s white supremacist/nationalist/capitalist demonization of human rights. For women of color, the very act of staking a claim to self-determination is a radical humanist act which has the power to dismantle moral regimes based on destructive oppositionalities.

Visit Sikivu’s website to learn more about her work at BlackFemLens.org.

How To End An Abusive Relationship
VIDEO: Make Red Lobster Cheddar Bay Biscuits At Home
How To Survive - Living With Your Parents (Again)
Te-Erika's Diary: Random Encounters In Long Beach